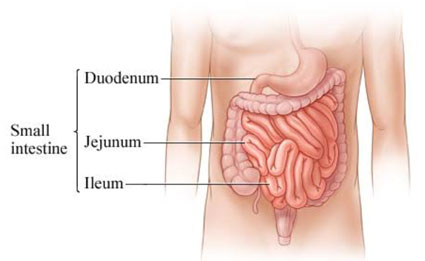 What is Small Intestine

Many of the conditions are listed below which causes infections, inflammation, ulcers, and obstructions in this digestive tract leading the doctor to make intestinal surgery:-

Bowel Obstruction: It is a blockage of the small & large intestine by something there than Fecal impaction. This can be assessed & diagnosed through the following techniques:-

In case of mechanical obstruction

Crohn's disease is a chronic inflammation and irritation of your digestive system. It commonly affects your small intestine and beginning of the large intestine. The disease may also affect the other part of your digestive system like mouth, anus etc. Crohn’s disease is an inflammatory bowel disease (IBD). If not taken care, it may become worse over the period of time.

Crohn's disease can happen to anyone and any age group of people although people having the age of 20-29 are more likely to have this disease with a family member, sibling or parents have an IBD or who smoke cigarettes.

Complications of Crohn’s disease are as given below:

One may also experience the Inflammation in other areas like joints, eyes, and skin. Apart from this, if you have Crohn’s disease in your large intestine, you are more likely to experience colon cancer. So better to know the chances & symptoms and protect yourself from developing the colon cancer.

Following are the most common Symptoms of Crohn's disease:-

According to experts & researchers, following factors are responsible to cause Crohn's disease.

Doctors may typically use a combination of tests or methods to diagnose Crohn’s disease:-

These tests are also ruled out to check the other diseases like ulcerative colitis, diverticular disease, or cancer, that cause symptoms similar to those of Crohn’s disease.

There is no single procedure or technique to treat the Crohn’s disease. It may treat with any of the techniques or group of treatments such as medicines, bowel rest, and surgery. The goal of treatment is to reduce the inflammation in intestines and to prevent flaring-ups of symptoms.

Many doctors will refer the medicine to the patients, although medicines will not cure the Crohn’s disease, but may reduce the symptoms. Some of the medicines are:-

If you are facing severe Crohn's disease symptoms, then you may be asked to rest your bowel system by not eating or drinking anything. Bowel rest involves taking several nutrients rich fluids only prescribed the doctors. Doctors may prefer to insert a feeding tube into the stomach or may give intravenous (IV) nutrition by a special tube through the vein in your arm. You may stay at the hospital or take the treatments at home. In most of the Crohn’s cases, Bowel rest heals the intestines.

Doctors or surgeons may recommend you to treat the following through the surgery:-

The following surgical methods and measures will be taken to cure the Crohn’s disease:-

Doctors may ask you to make changes in your diets by reducing or avoiding the quantity of carbonated, or “fizzy,” drinks, popcorn, vegetable skins, nuts, and other high-fiber foods. He may advise you to eat smaller meals frequently, drinking more liquids, keeping a food diary to help identify foods that cause problems. The doctor may prescribe you following diets depending upon the symptoms, complications, and medicines:-

Get the immediate consultation with the Expert surgeon to diagnose and treat Crohn's Disease.

Small Intestine at Dr.Vaibhav Kapoor Rated 4.9/5 based on 392 customer reviews
Contact Us