Gastric band Procedure is also called Lap band which is an effective technique of weight loss surgery. This is FDA approved in 2001 in the US to treat morbid obesity. It is was  commonly used in India to reduce obesity or excess weight.Now more doctors prefer sleeve gastrectomy or gastric bypass. 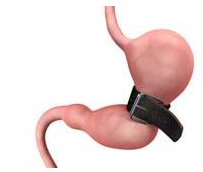 A Lab band is placed around the stomach directly below the esophagus. The small port is inserted into the skin and tube is attached with the band. Doctor make sure to tighten the band after the surgery. The band is filled with saline that compresses the band around the stomach area. Food then sits in this area giving the patients a feeling of full stomach. Food makes it process through the normal digestion system.

The lap band is typically adjusted a few weeks after the surgery. The gastric band will be filled with saline by the surgeon much time till balance of restrictions and ability to eat is achieved.

Some chronic or serious complications involved in Gastric Bands are:-

Gastric Bands at Dr.Vaibhav Kapoor Rated 4.9/5 based on 392 customer reviews
Contact Us